Find Stuff on My Site

On the way from the airport in Belize City to Chan Chich, we drove through a small town and saw a sign warning of a ‘baboon crossing’ – “baboons in Belize,” I queried Bruce? “Black howler monkeys,” he responded. The locals referred to them as baboons. Everywhere we walked while we were at Chan Chich, and every morning as part of the dawn chorus, we were treated to the sounds of howler monkeys. The male howlers roared to let other howler troops know where they were and to declare their territory. It’s no wonder that the Mayans thought the howlers were some sort of demons. Their roars could be easily taken as some sort of great, vicious beast just looking for people to eat. One of the other guests said she saw a howler troop regularly along a trail that ran parallel to a small stream. I walked the same trail – no howlers. I tried mightily for a week to spot howlers and get a video of them – to no avail. I guess they just didn’t like me!

On another day, Carol and I were walking along a trail when we heard what sounded like someone or something crying and screeching. We stopped, listened, and looked. Off to the side of the trail, within the trees, we saw a lone, smallish spider monkey. The monkey was slowly moving through the trees and stopping at intervals to cry-out, to screech. We concluded that it was a lost or abandoned child looking for mom or family. We quietly walked on. 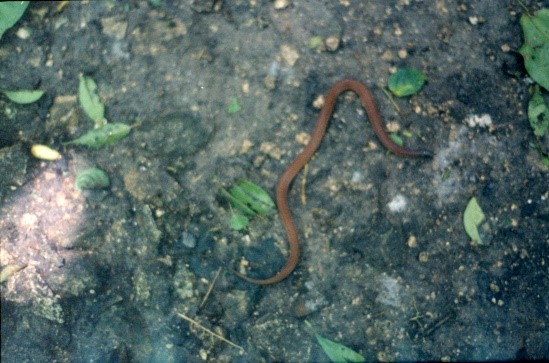 Not long after seeing the young, distressed spider monkey, we saw the only snake we were to see while in Belize. It was a small brownish critter about six or eight inches long. I have looked in my critters of Belize book and can’t find anything that looks like it. We did see some lizards around our cottage. A skink of some sort that disappeared under the cabin before I could get a good look and what looked like a gecko in the ceiling.

On our last day at the lodge, one of the other guests called out to us. There, up in a giant fig, was a troop of black howlers. They were not making much noise and were moving slowly along eating leaves. The big male would stop every now and again and sort of look around. One of the females was carrying a baby. We all found chairs or chaise lounges and parked ourselves below to watch. I started to take a video of the monkeys – foiled — the batteries were dead, as were my spares. Isn’t that the way it always happens? I had been trying for a week to see and video howlers; now here they were, and my camera was dead.

As we sat and watched, we all heard a commotion from off to one side of the tree with the howlers. A spider monkey was swinging and prancing through the trees, headed straight toward the howler troop. As we watched, the spider monkey commenced harassing the howlers. It would swing from a limb or dash along a big branch and snatch at the coats of the howlers. The howlers would move slowly away, apparently trying to ignore the pest. The spider monkey seemed to take particular joy in bothering the female howler with the baby. The howler mom just moved closer to the big male, but he didn’t appear to do anything. None of the howlers ever seemed to do anything that looked defensive, they just moved along, fed themselves, and tried to avoid the spider monkey. The spider monkey kept up its harassment for maybe 30 minutes as the howler troop moved slowly on and eventually disappeared from view in the canopy. I have never heard of such a scene before – not in any of the many documentaries I’ve watched on primate and other animal behavior.

This site uses Akismet to reduce spam. Learn how your comment data is processed.